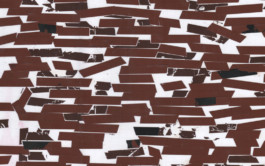 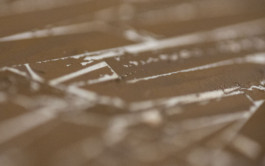 The present work’s underlying concept is based on processes of corrosion, suppression or decomposition of time-based information as well as their mergence, which may result in formal reshaping through random and uncontrollable events. Loosely relating to the geological metasomatic process, the magnet coating is carefully removed from audiotapes that were augmented with innumerable sounds beforehand. Hence, this particular magnet coating is divided into small fragments that eventually appear to lie on top and in to one another. Those detached fragments and particles define the first, lowermost layer. Furthermore, they determine which magnetic coatings will be separated from the carrier layer. The removed and already adhered particles from layer one differ concerning length, order, direction, density and finally force, and they occur randomly without any particular pattern. Depending on how those parameters work together, they prohibit and / or influence the dissolution of subsequent layers. In addition, only the smallest pieces deriving from the unedited audiotapes are adhered onto a foil. If required, both methods may be blended with one another. Besides, another manipulation is performed by applying different resolvents directly onto the unedited augmented audiotapes which were mentioned earlier. This procedure may also be executed on the foil that has not yet been cropped.

In order to change the new carrier layer´s magnetic into audible information, finally the foil is cut into strips that approximately resemble an audiotape’s width. Afterwards, they are stuck together in order to form a tape without gap. Again, the procedure’s sequence or the bonding’s direction may happen by chance and without any preset parameter. Following this purely visual and almost uncontrollable process of removal, and also the potentially simultaneous rearrangement of magnetically memorised audio-material, a conglomerate of tones and sounds emerges, which repeals every single reference point to the primal temporal form. 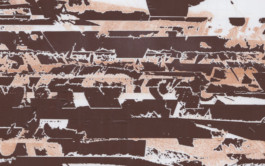